Augusta National Golf Club, Georgia. Home to the golf calendar’s first major of the year since 1934 and the only major to be hosted at the same course every year. But it’s in the last 20 years that we’ve really seen the course’s best, most challenging and most surprising times. Ahead of The Masters 2017, we review the best of the past, the moments to forget and some of the things you may not know about the home to the first major.

Among all the traditions and really well known facts about beautiful Augusta National. But how well do you know Augusta and The Masters? Did you know these facts?

The Best of the Past

The Masters seems to bring out the best, most spectacular and most memorable moments in the golf calendar every year! Here’s our collection of our favourite moments (so far!):

The soon to be 2-time winner made the most of being left-handed, coming out of what was a tricky lie with a miraculous 52-degree wedge; turning it 40 yards left-to-right into the 10th green. Sinking his 2-putt par to win his first Masters tournament amid breaking down into tears. Only Bubba would play Bubba golf in The Masters playoff.

We debated Louis’ 253-yard double eagle, an insane feat on its own. But with this, you could never find a better use for the term “by luck or by judgement” and we like that! The South African, finding the green well at the 170 yard 16th hole, saw his ball rolling round the green and using the slope the come within three feet. However, it wasn’t rolling towards the hole, it was rolling towards playing partner JB Holmes’ ball. Rolling into Holmes’ ball, it took the most fortunate of turns and dropped in the cup. Calculated?

This must sit at number 1 for our list as it’s just so iconic, as one of golf’s, and sport’s, modern greats kept up his pressure on Chris DiMarco. DiMarco had landed safely in the middle of the green (2 shots behind) whilst Woods was off the green, left. Woods aimed an audacious chip 20-25ft left of the pin, which rolled perfectly around the slope of the green before stopping millimetres short of the hole, for a second, before dropping in. Pure class, pure Tiger.

The Ones to Forget

What goes up, must come down; as we all know in golf! But these three really did come down, hard. We feel for them, we’ve all been there guys! Remember these?

If pulling your drive way into the trees on the left isn’t enough, even being on the verge of a guest cabin’s garden was completely recoverable. However, several shots later, Rory left the 10th with an unprecedented triple bogey, followed by a bogey on 11 and a four-putt double bogey on the 12th, the par three. If that’s not bad enough, he drove his ball straight into Rae’s Creek on the 13th. It’s safe to say his four-shot lead didn’t survive that. But, fair play to McIlroy, he did win the U.S. Open 8 weeks later by a superb eight shot margin.

Spieth can almost call Augusta his second home with a win and two runners-up finishes in his last three tournaments. But unfortunately for him, that doesn’t tell the whole story. Five up with nine to play, you may as well have given it to him. Even after 10 and 11 were bogeyed, it still looked comfortable. However, it was his efforts on the 12th that puts him on number 2 in our list. A lacklustre tee shot into the water was poor enough, but he caught his 3rd shot fat and shared the same fate, leading to a quadruple bogey and one of the most shocking falls from grace in one round. Still, we’re sure Danny Willet never minded…

Oh Greg! The world watched in agony and cringed as Norman teed off on Sunday, leading by 6 shots. But as Augusta shows, no win is nailed on. Three straight bogeys on 9, 10 and 11 meant Faldo had now caught him. It seemed that was enough to tip Norman over the edge as he too found the water on the par-three twelfth. He all but shot himself down and offered himself and the Green Jacket to Nick Faldo on a plate, finishing on a Sunday-golfer’s score of 78. Faldo gladly obliged though and saw himself through to his 3rd Masters win.

A timely inclusion for the Argentine. He had, for all intensions, put himself into a playoff with Bob Goalby. However, he hadn’t noticed playing partner Tommy Armor had marked a “4” instead of a “3” on the 17th. Unfortunately, penalty included, means he lost out to Bob and no chance of a green jacket for him. Sound a little too familiar for Lexi Thompson?

So, that’s our little facts, best and worst leading up to the 81st Masters tournament. Do you agree with our picks or would you have chosen differently? Let us know on Facebook or Twitter.

« Return to the Blog 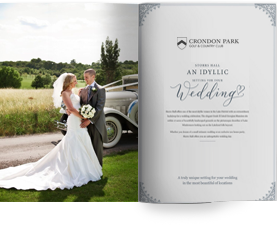 Our brochure is a fully comprehensive reflection of what we have to offer. From our special Wedding Ceremony room, to our Baronial Hall Barn, it is no wonder that we are considered the venue for all occasions.

We use cookies to ensure that we give you the best experience on our website. If you continue to use this site we will assume that you are happy with it.OkCookie policy